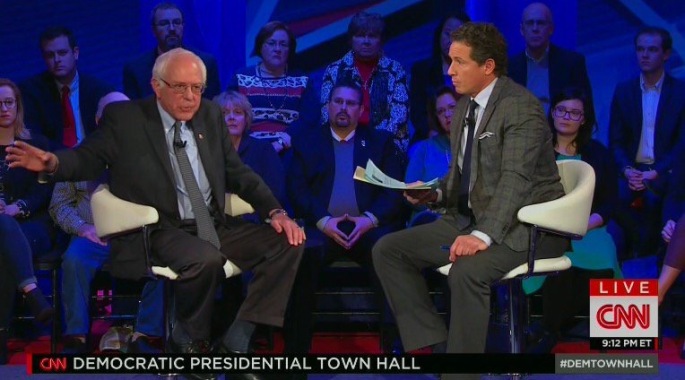 Tonight at CNN’s Democratic town hall, which will air from 9pm to 11pm ET, Senator Bernie Sanders of Vermont will appear first, followed by ex-Maryland Gov. Martin O’Malley and then former Secretary of State Hillary Clinton, CNN announced Monday. Each will have 30 minutes onstage at Drake University’s Sheslow Auditorium and will face questions from audience members as well as CNN Anchor Chris Cuomo.

The Iowa Democratic Party and Drake University invited the audience, which will also include some CNN guests.

The Town Hall will also be live-streamed online and across mobile devices via CNNgo. CNN International and CNN en Espanol will also simulcast the Town Hall.

CNN’s New Day anchor Chris Cuomo will host a Democratic town hall in primetime one week before the Iowa caucus, the network announced this morning.

“We are honored to partner with CNN on their town hall with our three fantastic Democratic candidates,” said Dr. Andy McGuire, chair of the Iowa Democratic Party. “With this event airing just one week before the first-in-the-nation Iowa caucuses, it’s an incredible opportunity for Iowans to see our candidates detail their plans to move our country forward and their vision for Iowa and the nation.”

It will air on Monday from 9pm-11pm, and a spokesperson for the network said it will make the town hall available to its Iowa affiliates to air live.

This comes as just this week, the RNC gave CNN the Republican debate that NBC News was originally slated to host.

During a town hall on Tuesday, CNN president Jeff Zucker apologized to staffers for a controversial story on Freddie Gray, referring to him as “the son of an illiterate heroin addict.”

As the Baltimore Sun notes, CNN has removed that description, and instead has added an editor’s note. “A reference to Freddie Gray’s mother was removed from this story because it appeared out of context.”

But an insider told TheWrap Zucker said the “intent of the story was to show that Freddie came from a tough environment but it came out wrong and was updated on the digital end” and he apologized for that.

Tonight at 9pm ET, Anderson Cooper will host a town hall, branded as Police Under Fire: AC360. A description for the show says “Examining questions about race, justice and tensions between communities and the people who police them.”

Those who got tickets for the event were to be present at Columbus Circle by 11am, and the special report will be taped at 1pm ET today.