On live television this morning on New Day, CNN correspondent Omar Jimnenez was arrested while filing a report. Shortly thereafter, Jimenez’s producer, Bill Kirkos, and cameraman, Leonel Mendez, were subsequently arrested as well during a live shot on New Day.

Jimenez can be heard saying “wherever you want us we will go. We’re getting out of your way when you were advancing through the intersection. Let us know and we’ve got you.”

Anchor John Berman then read an official CNN statement, “A CNN reporter and his production team were arrested this morning in Minneapolis for doing their jobs. Despite identifying themselves, a clear violation of their First Amendment rights. The authorities in Minnesota, including the governor, must release the three CNN employees immediately.” CNN’s legal team is currently investigating the situation.

A little over an hour and a half later, Jimenez was released, and Gov. Tim Walz told CNN Worldwide president Jeff Zucker, “I will publicly address what happened this morning and apologize to the crew. You are essential to our democracy and your ability to report must be unhindered.”

“Unmasking in and of itself, nothing wrong with that. Leaking classified information, and by definition, these phone calls were classified. That’s a problem, correct?” anchor John Berman asked, to which Clapper answered in the affirmative.

Regarding the rumors Clapper leaked, Berman said, “And if anyone did leak the contents of these conversations with or without the name, that would be a problem, yes?”

Though after that question, Clapper disappeared from the CNN video.

James Clapper is FINALLY asked a tough question by CNN.

Watch what happens right after.

Minutes later, Director Clapper returned, and Berman resumed his tough questioning. “David Ignatius put out this famous column on January 12th where he mentions the phone call between Michael Flynn, the December 29th phone call. Did you leak that information?”

CNN is looking to add a new all-black panel show to its weekend programming, according to a Page Six report. During the Democratic debates last week, airing on New Day, CNN had on CNN commentators April Ryan, Bakari Sellers, Angela Rye, and Andrew Gillum. After their appearances, CNN is looking into signing them to their own show to “rival… Joy Reid [and] the Rev. Al Sharpton.”

“It was the most excitement on [New Day] since Chris Cuomo left as co-anchor,” a source told the publication. “CNN is fast-tracking talks … to develop it into a stand-alone show. The early chatter is that it could start as a weekend show that would rival MSNBC’s programming with Joy Reid, the Rev. Al Sharpton and Kendis Gibson.”

Your favorite @CNN squad was back on @NewDay today! I so enjoyed working with @Bakari_Sellers @AndrewGillum & my girl @angela_rye the last three mornings. #CNN #DemDebate 💪🏽 pic.twitter.com/UIeZUXlvVE

Some of CNN’s smaller divisions based in New York made the move in early April, with its Newsroom-branded shows moving in early May, CNN Tonight and Erin Burnett OutFront moving the second week of May, and Anderson Cooper 360, New Day, and Cuomo Prime Time all making the move this week.

According to a gossipy piece in the National Enquirer, however, it wasn’t a glamarous move.

“Everything looked half-done and nothing worked when they got there!” one insider said to the Enquirer. “There was no internet. The TVs in the offices didn’t work. There wasn’t even toilet paper in the bathrooms! It was a joke!”

“The place totally isn’t finished! They just weren’t ready for business, at all,” one source told the Enquirer.

“That’s why they didn’t bring over most of the prime-time talent. God forbid Anderson Cooper’s toilet wasn’t ready to flush when he arrives!”

Things are so disorganized, on-air guests have reported getting lost between the lobby and the makeup  room on the 19th floor, sources told the tabloid.

In a curse-word laden interview with the Hollywood Reporter, CNN’s newest highly-rated host, Chris Cuomo of Cuomo Primetime dishes on just about everything on his time at CNN.

Acknowledging he is still the underdog at 9pm against cable news heavyweights Sean Hannity and Rachel Maddow, he says, “I respect my competition because I have to respect their success. Who am I to shit-talk them? Any metric you want — relevance, ratings — they’re kicking my ass. We are the underdog. I am OK with that.”

However, Cuomo notes, “We beat Morning Joe‘s ass 2.5 of the seasons that I was there [on New Day]. We beat [Joe Scarborough] even though he had his head way up Donald Trump’s ass through the campaign and kept having him on the show.”

CNN chief Jeff Zucker says Cuomo’s 9pm show is “everything we hoped it would be” and wishes he would cut himself some slack. “He’s way too hard on himself,” he says. “He’s a competitor. He wants to win in the first inning of the game. We’re not even out of the first inning of this program.”

Even a rival veteran producer grudgingly acknowledges Cuomo’s success: “He’s actually doing a much better job than most people ever thought he would do.”

“He never backs down from a fight,” Zucker points out. “That’s what makes him the perfect cable news anchor.”

Asked if he supports Cuomo’s more controversial bookings, including Conway, Zucker responds, “Would they be on CNN if I wasn’t supportive? I’m not trying to be cute. Of course I’m supportive. You can’t run a news channel and you can’t do a show if you don’t talk to all sides.”

Ratings will come. “Eighty percent of the audience still doesn’t know who he is,” Zucker says. “We all talk about [ratings] and traffic in it and live in it. That’s not the real world. Most of the world doesn’t know who Chris Cuomo is. It takes time. You build over time. “While Cuomo says he’s always been told that he’s “hard to manage,” Zucker hasn’t found that to be the case. “I find no evidence of that,” he says.

According to a release from the network, Chris Cuomo’s Cuomo Prime Time continues to be the network’s highest-rated program across its programming. For the month of January, CPT averaged 1,641,000 total viewers, allowing the show to continue its reign as #1 for the network for eight consecutive months; it remains the most-watched in the demo as well for CNN with an average of 492,000.

As CNN highlights, the Cuomo-anchored program has narrowed the gap significantly with Fox’s Sean Hannity to just -8% in the demo, 25-54 (492k vs. Fox’s 537k). Aside from last month when CPT topped Hannity for the first time ever, the monthly gap has never been this narrow since Hannity started hosting the 9pm hour, per CNN.

Cuomo delivered the network’s overall highest 9pm January ratings ever in 25-54 and second highest among total viewers (behind 1999).

CNN senior political commentator Rick Santorum has issued an apology for using profanity while on a panel discussion this morning on New Day. The former U.S. Senator and 2016 presidential candidate was defending Supreme Court nominee Judge Brett Kavanaugh, saying that it was “bullshit” to imply he didn’t remember sexually assaulting Christine Blasey Ford due to blacking out.

He said there were “no excuses” for his profane language, but that he stood by the substance of what he was arguing.

I apologize to the anchors on @CNN @NewDay and the viewers for using profanity during the show. No excuses. Stand by substance of what I said, but not how I said it. #tcot

CNN’s flagship morning program New Day was a recipient of the network’s sunlighting of CNNMoney and greenlighting of CNN Business. CNN Business, which as I reported launched officially today, includes not just a new name, but a new tech/money-based bureau in San Francisco.

Pictured above was the old look for the CNNMoney Center segment on New Day, housed in a corner of the morning show’s studio, generally presented by the network’s chief business correspondent and Early Start anchor Christine Romans.

As of today, however, going inline with the new CNN Business branding, Romans’ segment received a facelift as well, as reported by NewscastStudio. 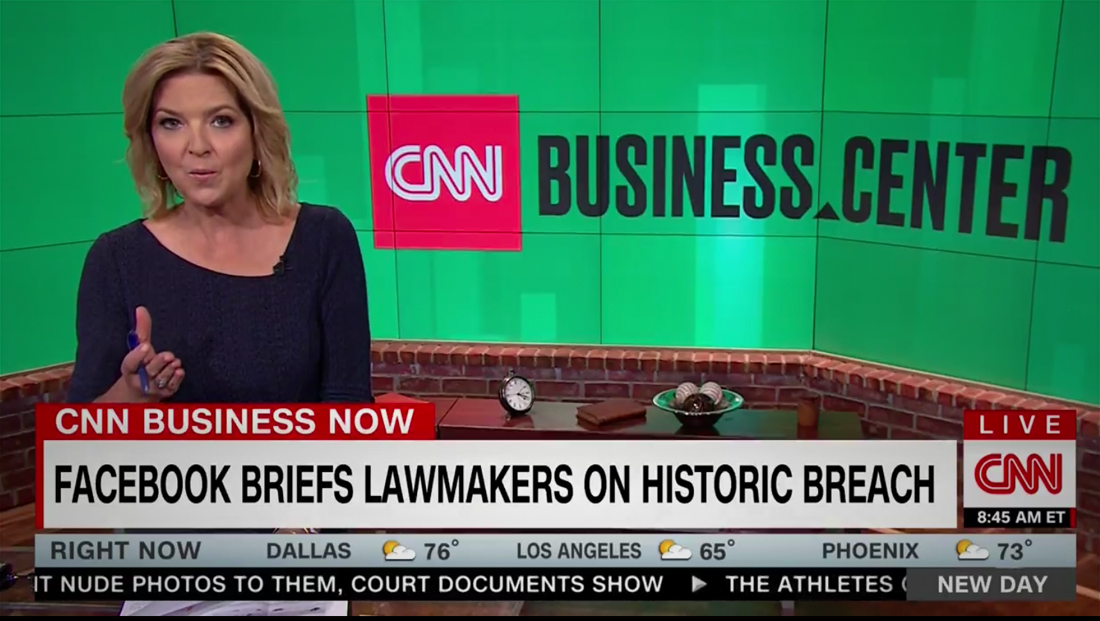