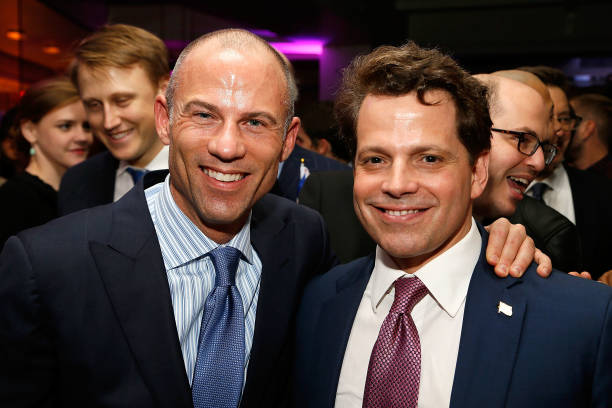 According to a report out from the New York Times, well-known TV agent Jay Sures has been pitching a show featuring Stormy Daniels’ attorney Michael Avenatti and the former White House communications director of 11 days, Anthony Scaramucci, to both CNN and MSNBC.

As the Times notes, both have become frequent cable network guests: Avenatti as one of Trump’s greatest antagonists, and Scaramucci as a loyalist to the president even after flaming out after less than two weeks at the White House.

Representatives for MSNBC and CNN declined to comment, as did Sures and Scaramucci.

“I have no interest in television right now,” Avenatti said. “I enjoy my law practice and look forward to prevailing on behalf of my client Stormy Daniels.”

The show, if it would come to fruition, would be similar to the debate program, Crossfire, that aired for years on CNN.

Conservative commentator and CNN contributor S.E. Cupp will be taking her talents to HLN beginning in June, reports Variety, where she will host a nightly program at 7pm, leading up to Ashleigh Banfield’s Primetime Justice.

Known for her political stances, Cupp hopes to branch out in this new HLN show, according to Variety. “I think it’s inarguable that there’s still a lot to talk about when it comes to politics, but I also think like a lot of regular people, we are kind of looking to talk about some other stuff again,” she said, adding, “These are not the conversations shaping up in the halls of Capitol Hill, but the conversations on your back porch.”

Her show will instead focus on pop culture, parenting, sports and crime.

“You won’t always agree with me, but I’ll always be honest and I will ask my guests to be the same.”

Earlier this year, he suggested CNN fire paid contributor Ana Navarro, saying that she lacked “talent” and that she “works for Bush.”

And now, CNN conservative political commentator SE Cupp has been very critical of Trump, calling his plan “pretty dumb” and clashing with spokeswoman Katrina Pierson on The Lead.

So, naturally… Trump attacked Cupp on Twitter, and even claimed she would be gone from CNN soon.

Mediaite columnist Joe Concha wrote a piece on CNN and the struggle the network will be facing ahead of the 2016 election.

He wrote that the network will be “in a tough position until November 8, 2016 finally comes around.”

In looking at the changes Zucker has made, the most noteworthy (and important) place to look is primetime. Erin Burnett—the network’s most consistent performer–is rightly still at 7:00p EST. Anderson Cooper is still at 8, but lost his 10:00 PM AC360° Later panel show. Piers Morgan was relieved of his duties at 9 and has been replaced by a mix of CNN Special Report (Tuesday this week) and various taped programming (Bourdain, Bourdain, Rowe, and Bourdain are on Monday, Wednesday, Thursday and Friday this week, respectively). At 10, CNN Tonight is essentially the Don Lemon hour, where the focus seemingly is on the more sensational stuff mixed with debates around race issues.

So what do all of those shows and personalities have in common? They’re all generally apolitical. Burnett and Cooper have a reporter’s DNA first and their programs largely reflect more of anchors breaking down big stories than what is normally the modus operandi of opinion hosts (staking out positions on big and/or controversial stories of the day and discussing/debating them throughout the program). The aforementioned taped programs don’t explore American politics in any capacity. Lemon’s show occasionally veers into this space, but invariably from a social issue perspective. In other words, CNN primetime will never be confused with MSNBC prime (Matthews, Hayes, Maddow, O’Donnell) and Fox (Van Susteren, O’Reilly, Kelly, Hannity).

The above, bolded for emphasis, is where I tend to disagree with Concha. Of course, he doesn’t specifically mention Don Lemon in the second paragraph, but when he says what “those shows and personalities have in common” is that they’re “all generally apolitical.” Lemon is anything but apolitical.

When looking at CNN’s overall weekday schedule, the only true political host in the bunch is Jake Tapper, who currently sits in not-so-friendly timeslot of 4:00p EST. The network once had Crossfire 2.0 at 6:30p, but the show was pre-empted so many times due to the All-All-In strategy that it could never build a following (the chemistry between the cast wasn’t exactly magic, either). Candy Crowley is no longer with the network. Peter Hamby—a big up-and-coming talent—has mostly left for Snapchat (he’ll still be a CNN contributor, but his primary responsibilities and time will be with Snapchat). Jay Carney lasted about six minutes before running for the truly big money at Amazon.

John King hosts a weekend political panel show, but also falls into the wonky-anchor-category than impactful-opinion guy. So does Jim Acosta, the network’s outstanding White House Senior Correspondent. Wolf Blitzer is a familiar face, but after all these years, still non-descript. Newt Gingrich and Paul Begala are fine, but you keep waiting for Bell Biv Devoe or Pearl Jam to play in the background when either is speaking (Begala’s close ties to Hillary also make him the Stephanopolous of CNN to half the audience). S.E. Cupp—formerly of Crossfire—is still underutilized and would be the next host of Fox’s Red Eye if she wasn’t under contract.

It’s worth pointing out that Burnett was left out of the 2014 midterm election coverage.

Awkward! CNN ran a Crossfire sponsored by Tempur-Pedic advertisement during The Situation Room. As has long been pointed out, the debate show is still MIA.

The Wrap has more:

“Crossfire, brought to you by Tempur-pedic,” the ad said with the Crossfire logo at the bottom of the screen. The only problem: Crossfire hasn’t aired since the middle of July, after it was yanked from the schedule in favor of breaking news of downed Malaysia Airlines Flight 17.

Eddie Scarry of Mediaite offered up some suggestions on how to resuscitate Crossfire (which has been MIA for quite some time). Unfortunately, he was way off…

Crossfire, should it return, will have to drop its entire current format.

Crossfire is at its best when the co-hosts are engaging each other. It was during those times that Gingrich compared Hillary Clinton to a clumsy Kim Kardashian and that Cutter and Cupp nearly started pulling on each other’s hair while debating which political party was more obstructive to progress.

Instead, all four co-hosts should be on set each day to discuss the news in whatever terms they want. CNN should also deem Cupp, given her TV experience, as the show’s moderator, if only to have someone who can toss to commercial and move the show’s topics along without looking like a public access channel production.

There’s still time to salvage Crossfire. CNN only has to make it worth saving.

First of all, Crossfire isn’t worth saving…period.

Second of all, SE Cupp is the only one even worth watching (and she’ll be going on maternity leave soon). Newt Gingrich, Stephanie Cutter, and Van Jones are little more than annoying political hacks who contribute very little to any substantive conversation.

For the past two or three weeks, there have been no new editions of this series. No new opportunities for potential readers and some of my previous columns are a tad dated.

The same goes for one of CNN’s shows, Crossfire. While Unguarded was also on a hiatus, that is because the show is unwilling to have a substitute host which is relatively okay due to the show’s format as a weekly, more long-form series.

Crossfire didn’t exactly start all that well. Three-fourths of the co-hosts were criticized or hated (S.E. Cupp is the exception) and the mention of the show quickly brought mention of Jon Stewart and his take-down that led to the first Crossfire’s cancellation. The show never took off with the viewers and the show tried several changes, such as going from a “Ceasefire” segment where hosts would find common ground to “Outrage of the Day” where the hosts would share a news story that angered them.

CNN Worldwide President Jeff Zucker has said that he would pre-empt programming for breaking news coverage. Even though that statement applied to tape programming, Zucker has had no problem shelving Crossfire, often for months at a time. Even when Crossfire is airing, viewers spend their Friday afternoon with a full two hours of The Situation Room with Wolf Blitzer, not that I’m complaining! Putting Crossfire in a schedule category that is mostly cable late-night shows is not the best for Crossfire nor CNN. The only scheduling more irregular is HLN at any time after noon.

Viewers like consistency, the ability to tune in at a certain time on a regular schedule for an extended period of time can best be felt when the ability is not there anymore. I can tune in and watch The Goldbergs every Wednesday every week. There’s an unspoken joy in that.

The same cannot be said for Crossfire, where its absence is starting to outweigh its appearances. Betsy Rothstein of the Daily Caller reported that Crossfire is on an “extended hiatus.” While this may seem like something we already knew, it’s significant that there is an actual confirmation on the status of the show and that it is grim. Layoffs have also been reported. Although, it is probably for the best. It doesn’t make any sense for the staffers to be around when the hosts have basically been demoted to occasional commentators and, not to sound rude, but hopefully the layoffs can count towards the amount needed for Turner 2020.

Crossfire used to be an institution at CNN. There was weekday Crossfire, weekend Crossfire, and the replicas such as Capital Gang and Evans, Novak, Hunt and Shields. A significant portion of CNN’s programming used to be ideological-hosted panel shows. However, that void has been filled by MSNBC and Fox News. Ignoring the fact that Crossfire 2.0 is much different from the original Braden and Buchanan format of two hosts and one guest “in the Crossfire,” CNN will continue to struggle with Crossfire. However, airing only periodically will certainly not help. Time to either cut it or bring it back permanently, CNN.

Tyler is an employee at TKNN.info, helping to run @TKNNPolJungle. His views are not necessarily held by his employer.