We love you, Alisyn Camerota!

If you can say one thing about cable news, it’s safe to say it’s polarizing. But should it be? No, not really.

Ever since Alisyn Camerota joined CNN with an as-of-yet-unannounced anchor role (though she will be anchoring CNN Tonight during the month of September), she has received a large amount of criticism from her alleged “fans” from her days at Fox News. Now, is it completely understandable that Fox viewers miss Alisyn? Yes. Is their behavior fair — or even mildly mature? No.

Every time Alisyn announces what shows she will be anchoring on a certain day (whether it is New Day or CNN Tonight), her exfans from Fox News lambast her on both Twitter and Facebook — in most cases, however, the reaction is larger and much more negative on Facebook.

If you’re like me, then you’re thinking they’re all nuts. You can miss your favorite anchor if they were to leave. If they go to another cable network, you have three options: 1) get over it; 2) follow them to that network; 3) unlike their Facebook page and you won’t get alerts from them.

Alisyn has been at CNN since July 14th. By now, you naysayers know she’s no longer with Fox, whether because she wanted out or because she was no longer wanted. Either way leave the lady alone! If you don’t like CNN, great. Unfollow her. Or, better yet, respect her: keep following her, don’t watch CNN… Just keep tabs on her. Why is that so hard? Why must you constantly express your displeasure and rage that she left?

There are a few positive notes mixed in, but not many… A few of the many negative examples: 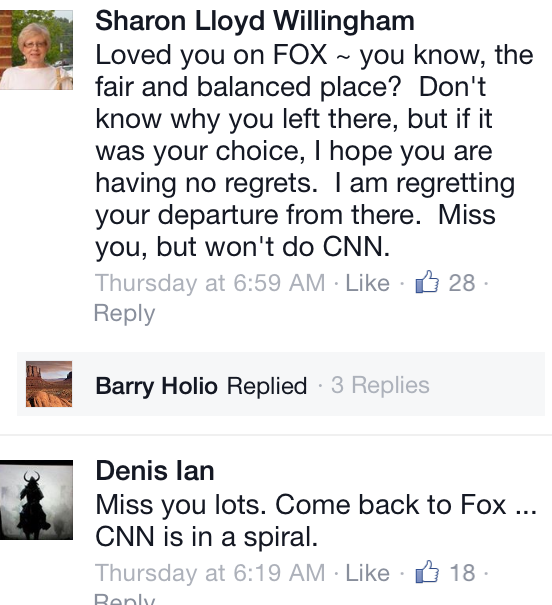 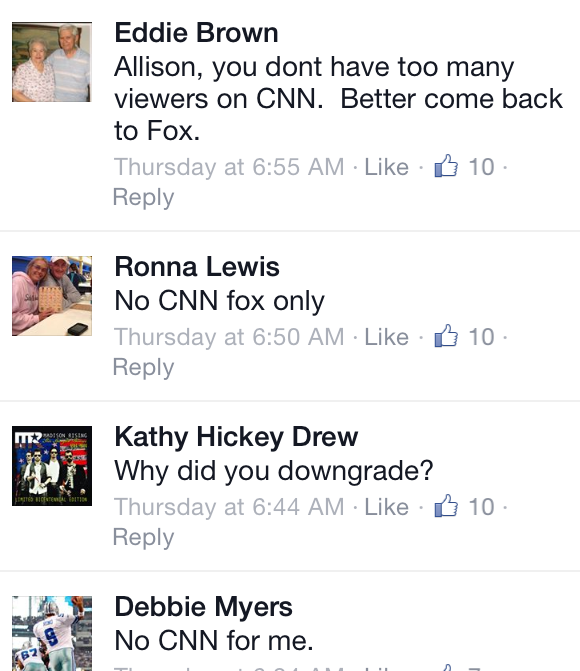